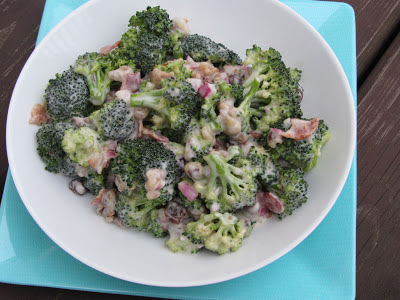 Broccoli salad is one of my favorites and one recipe I'm pretty sure you might already have. But this comes from my mom, it's not something I make very often because I'm usually the only one in the house that eats it. My mom gave me this recipe along with several others at my bridal shower almost 7 years ago. My awesome bridesmaids put together the cutest recipe box for me because they knew how much I love to cook and bake, they also asked each guest to bring along at least one of their own recipes to put inside. It was one of the best gifts I've ever received and to this day I still love it! I seriously think it's one of the best gifts to give to a new bride. 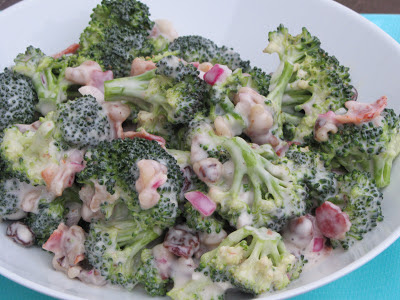 Last week I made this salad to go along with our baked ham and cheese sandwiches. I can't remember the last time I've gotten to have broccoli salad and was literally craving it. I love the crunchy broccoli mixed with the sweet red onion and walnuts, the saltiness from the bacon and the sweetness from raisins. The dressing itself is also on the sweet side. The more you let the flavors mingle, the better it tastes; although I will say it's best enjoyed no later than the second day. It doesn't make a huge amount so I'm sure you'll have no troubles . 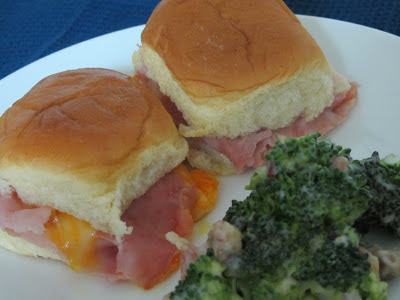 I will share real quick these baked ham and cheese sandwiches we made. They were pretty good and something very simple to make. I took a package of King's Hawaiian brand rolls, split them in half and filled them with a few slices of ham and cheese. We used provolone and colby-jack between all of the sandwiches. You could use whatever kind you like best though. I did mix together a few tablespoons of melted butter, 1 tbsp brown sugar and a few dashes of Worcestershire sauce and basted the insides of the top bun as well as the tops, just for a little extra glaze.  We baked them in a 9x13 inch baking pan, covered with foil for about 20 mins or so until cheese was melted. They were delicious, I don't think we had any left at all. These make for a very quick and easy dinner, lunch or even an appetizer.

Directions:
In a medium-large sized bowl combine bacon, broccoli, onion, walnuts and raisins. In a small bowl, combine all dressing ingredients and mix well. Pour dressing over salad and mix together. Let salad marinate in fridge for several hours before serving.
Posted by Steph at 7:46 AM