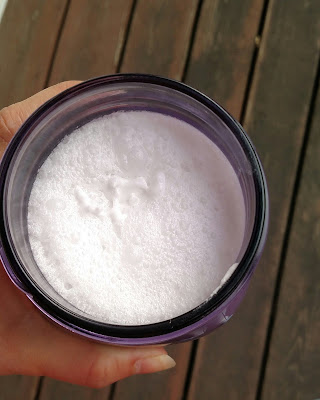 I've never been much of a milk drinker, not even growing up. Chocolate milk was something I remember drinking on occasion, but I really just never liked the taste of cow's milk. I even preferred my cereal dry because I hate soggy textures. I seriously would try to eat my bowl of cereal so fast, just to prevent any of it getting soggy!

I have never forced my girls to drink cow's milk, although the majority of them enjoy it. But, they also have come to love other types of milk, such as almond. Up until a few months ago, almond milk was a huge staple in our house. I make a smoothie every single day and have always liked to something other than just water as my base. Unsweetened almond milk was generally my choice. Unsweetened because of the high sugar content in the sweetened variety. Remember, read those labels! And honestly, when you're mixing it into fruit and other ingredients, you can't even tell the difference.

If you follow along on my social media platforms, then you know I had a hard time with kidney stones earlier this year. I ended up needing surgery and it wasn't fun at all. Since this was my second time getting stones, I have followed up with my urologist and did some testing. My lab results came back showing that my calcium levels were high. Without having seen my doctor and knowing exactly what that meant for me, I decided to start eliminating some things in my diet where I might be getting too much calcium. 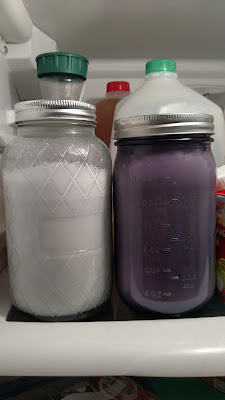 Almond milk was the biggest change. I don't know if you have ever paid attention, but the majority of our foods nowadays are fortified with additional vitamins and minerals. Almond milk has 45% of our daily requirements for calcium. And, that's just in an 8 ounce glass. There are times where I was using a good ten ounces for my smoothies. I began to really pay attention to the labels and searched out a new alternative.

I started using this brand of coconut milk, again the unsweetened kind, of course. The ingredients matched what I was looking for and the calcium level was by far the lowest I had seen in any other variety of milk in my area. In fact, I can only find it at my local Target store. It's also $4.00 for one half gallon container, more than double the amount I typically paid for the almond milk. But, it was exactly what I wanted, so you just learn to pay the money and I stuck to only using 8 ounces and adding a little bit of water.

I've since discovered a way to make my own though and saving myself some money. Literally this is so simple and I'm a little disappointed that I didn't think of it sooner! Making your own almond milk on the other hand, yes, that requires more time and energy. 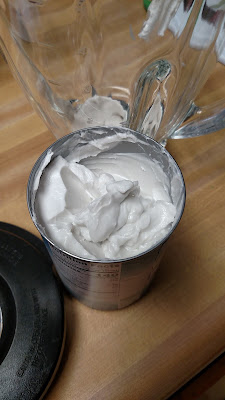 Did you know how healthy coconut is for you, by the way? It's a form of a healthy fat, something that we need in our bodies and for our brains. Even if you don't typically like the taste of coconut, I would challenge you to give it a try; especially when blended into a smoothie or protein shake, you won't necessarily taste the coconut flavor.

If you're into DIY projects and making things at home, rather than purchasing at the store; this is for you. If you're already a fan of coconut milk, you must try this. And if you're an avid almond milk consumer, try this variety. I think you'll be pleasantly satisfied. Cheers!

Ingredients:
13.5 oz. can coconut milk (found in health area or by other canned milks)
Water

Directions:
Open can of coconut milk and dump into blender. Fill can with water about 3 times and add to the coconut milk. My blender was completely full, I was able to get almost three full cans in there. Cover with lid and blend together well.

Divide milk into large mason jars or any large beverage container of your choice. I like the mason jars just so I can shake before using in my smoothies.  Store in fridge, use within 7-10 days.
Posted by Steph at 11:19 AM