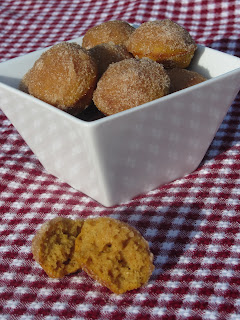 I know it's the middle of summer but who says you can't bake with pumpkin? One of my favorite muffin recipes happen to be pumpkin.  We made these for breakfast earlier in the week for something a little different and they were extremely delicious....like addicting good!

To be honest these were the first donuts I've ever tried making. I'm not one that likes to fry things, the fact that these were baked in a mini muffin tin appealed to me. You can't get much easier than that, right?

They were so moist, full of pumpkin and spice flavors and that cinnamon-sugar coating is what sends these little treats over the top! After I started coating the donut holes in the butter/sugar coating I felt a little guilty serving these to the kiddos for breakfast- not very healthy. From that point on I only dipped the top halves in the coating and even left some plain, they still were very good.

They surely did not last long in our house, the kids kept sneaking little bites throughout the morning.....and I may or may not have had my fair share. These are definitely a keeper in my book. I bet they would even freeze well. 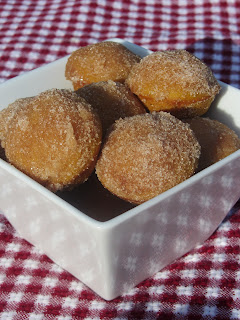 Using a small cookie scoop (even a regular spoon will work), divide batter among muffin wells. Bake for 10-11 minutes or until a toothpick inserted in center comes out clean. While the donut holes are baking, melt butter in a bowl. Combine sugar and cinnamon in another. Remove the donuts from the oven, when cool enough to handle, dip into butter and then cinnamon-sugar mixture to coat. Makes close to 36 donut holes.

Slightly adapted from: The Craving Chronicles 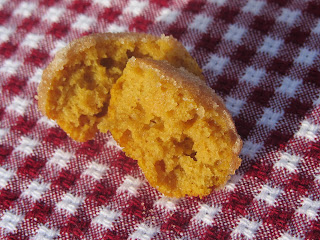