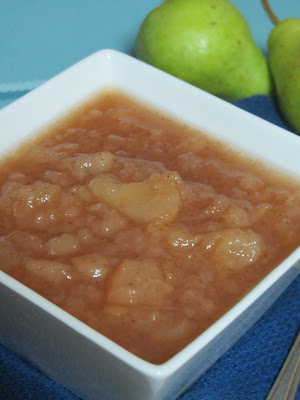 Anybody else relieved it's Friday? It's been a particularly long week here and I'm ready for some relaxation. We had something going on almost every single day this week so I'm feeling a little more tired than usual. I also finally got the last of the pears used up yesterday. I've been making batch after batch of this delicious pear sauce.

I make it just the same as my applesauce, but with pears. I literally throw chunks of peeled, diced pears in a crock pot with a tiny bit of water, a little sugar and heaping amount of cinnamon and let it do it's thing all day long. 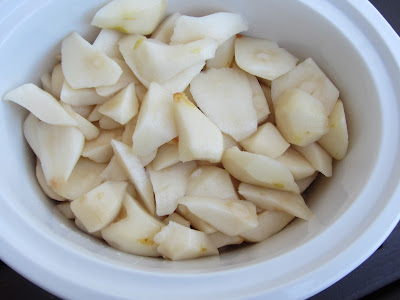 About 6 hours or so. Then mash it all up with my potato masher, we like it chunky still. Let it cool and divide among small containers to stash in the freezer. It will keep all winter long and will be one tasty treat come January and February.

I think I've got a total of nine 2-cup containers of this stuff in the freezer now, plenty for our family. I even made a batch without any cinnamon or sugar, just plain pears for the hubby as he doesn't like cinnamon much. I forgot to try it though, but it will be easy to sweeten up if needed or I can even use it to bake with. Maybe some muffins or bread. 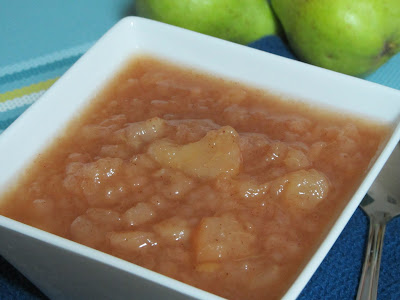 If you can get your hands on some good local pears or even grab some on sale from the store; make a batch of this! It's a great fall treat!

Directions:
Add peeled and diced pears to a large crock pot. Pour in water, sprinkle sugar and cinnamon over top. Stir to combine everything. Cover and let cook on low for the day, about 6 hours. When pears are down, take a potato masher and mash until you've reached desired consistency. Let cool completely and then ladle into small containers. Cover, label and stash in freezer.