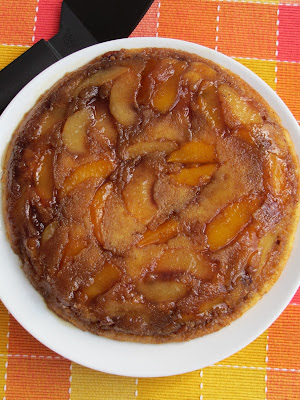 We had a very nice weekend, but they always seem to go by so fast! Saturday's softball tournament filled our entire day and we were pretty tired by evening, our daughter's team ended up taking first place so that was exciting. Yesterday we spent a couple hours at the pool and got caught up on some chores around the house. Other than that it was a pretty relaxing day, it felt good.

The previous Sunday a good friend of ours invited us over for an impromptu barbecue. Of course I don't ever like to go anywhere empty handed, I couldn't decide whether to make a side dish or a dessert. I had a few ripe peaches staring at me on the counter so it was pretty obvious I needed to go the dessert route. 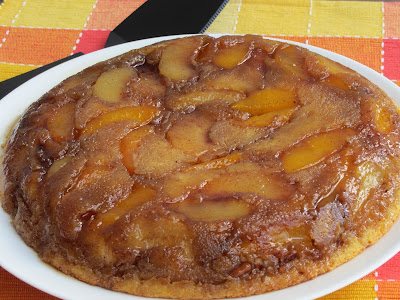 I love this cake, it's a perfect summer treat and a good way to incorporate delicious peaches. It also comes together very quickly and I love that I can bake it in a skillet. You'll most definitely want some fresh whipped cream or vanilla ice cream to serve alongside this, it takes it up another notch and makes this dessert even more divine.

Directions:
Place egg whites in a large bowl and let sit at room temp. Preheat oven to 350 degrees. In a 10-inch ovenproof skillet, melt 1/2 stick of butter. Stir in brown sugar, cinnamon and nutmeg. Remove from heat, arrange peach slices in one layer over brown sugar mixture and sprinkle with pecans.

In another bowl, whisk together flour, baking powder and salt. In a medium bowl, whisk egg yolks together until slightly thickened. Gradually add in sugar, whisking until thick and a lemon color. Whisk in milk, melted butter and vanilla. Fold in to the flour mixture.

Using an electric mixer, beat egg whites until stiff, but not dry. Fold into cake batter. Pour batter into skillet over peaches. Bake for 27-30 minutes or until toothpick inserted in middle comes out clean. Let cake cool for at least 10-15 minutes before inverting onto a plate. Serve either warm or at room temperature with whipped cream or ice cream.
Posted by Steph at 8:44 AM