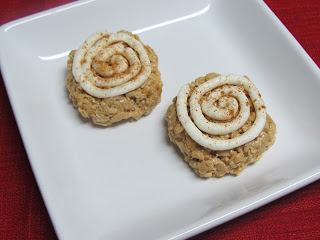 The kids and I are enjoying a snow day, it's been coming down like crazy since early this morning. Like the good wife I am, I've been out trying to shovel in effort to help my hubby out for when he gets home from work. No such luck, we might as well wait until the storm's over. So instead I think the kids and I will enjoy one of these with a warm glass of hot chocolate when they wake from naps.

I whipped up these little gems last night and oh my are they ever good! They seriously taste just like a cinnamon roll and who doesn't adore one of those? They're quick to mix up, just like any other rice krispie treat and I promise you they will not last long! You can make them into cute little cinnamon roll shapes like I did or simply leave them in a bar form and just spread the frosting right on top. Whatever makes your heart content! If you're snowed in like we are today, give these a try, I'm sure you have the ingredients on hand. You can thank me later!

Directions:
Grease a 9x13 dish with cooking spray, set aside. Melt butter in large saucepan over medium low heat. Stir in salt, molasses and cinnamon. Add marshmallows and stir constantly until marshmallows have completely melted. Remove from heat and stir in vanilla. Fold in cereal, stirring until evenly coated. Pour cereal mixture into pan. Spread evenly into pan. Allow to cool several minutes, then cut while slightly warm. Using your hands, round edges of cut squares by cupping your hands around the edges and gently pressing. Allow to cool completely.

In the meantime cream butter and vanilla in a medium bowl. Gradually add in powdered sugar. Add more or less according to your liking. Mix in 1-2 tsp of milk if needed to thin icing.

Pipe frosting onto rice krispie treats once completely cooled. Use a pastry bag with a small round tip or simply put frosting in a baggie and snip the corner, use that as your decorating bag. Dust tops lightly with cinnamon if desired. Makes 15-17 treats.

Slightly adapted from: Cooking Classy
Posted by Steph at 1:55 PM

Email ThisBlogThis!Share to TwitterShare to FacebookShare to Pinterest
Labels: Desserts