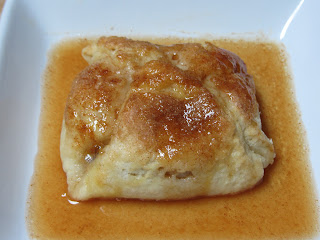 This year I'm definitely taking advantage of apple season. I've enjoyed trying out some new recipes as well as some old favorites. Yesterday was my kind of day, we had 70 degree weather and it was absolutely beautiful out, we had guests over for dinner and I was able to tinker around in the kitchen throughout the day. I started my very first batch of apple butter in the crockpot first thing in the morning and I'm happy to say I think it turned out pretty good. It's not as thick as I would have liked it to be but I can't wait to try it out on some bagels for breakfast.

Anyways, back on track. I also made these delicious apple dumplings to serve with our dinner last night. This was my first time ever making a dumpling and I'm so happy with how they turned out. Everyone loved them but I can't believe I forgot to make the cider sauce to serve with them! I think this sauce is half of what makes them so darn good! Oh well, I know everyone enjoyed them warm out of the oven with some vanilla ice cream. The dough was a nice, soft, buttery biscuit. The apples inside were nice and tender, and I'm loving this sauce! I used apple juice instead of cider because that's what I had on hand and it worked just as well, I just added a little bit more cinnamon to make up for it.

This certainly isn't going to be your quick and easy, throw together in 20 minutes kind of dessert. I also realize that I like to bake more complicated desserts than others; but if you have some extra time on the weekend, take advantage of those delicious apples from the orchards right now and make this one!

Directions:
For the dough: Process the flour, sugar, baking powder, and salt in a food processor until combined. Scatter butter and shortening over the flour mixture and pulse until the mixture resembles wet sand. (You can also do this in a large bowl using a pastry blender) Transfer the mixture to a bowl. Stir in buttermilk until a dough forms. Place the dough on a lightly floured counter and knead briefly until the dough is cohesive. Press dough into an 8 by 4-inch rectangle. Cut in half crosswise, wrap each half tightly in plastic wrap and refrigerate until firm, about 1 hour.

For the apples: Heat oven to 400 degrees. Combine the sugar and cinnamon in a small bowl. In a second bowl, combine the butter and 3 tablespoons of the cinnamon sugar mixture. Remove the core from the apples using a corer, then peel and halve them through the equator. Pack each apple with the butter mixture.

Bring the cider or juice, water, sugar and cinnamon to a simmer in a saucepan and cook over medium-high heat until thickened and reduced, about 15 minutes. Off the heat, whisk in the butter and lemon juice. Drizzle the sauce over the dumplings and serve.

Source: The Best of America's Test Kitchen, Best Recipes and Reviews 2011
Posted by Steph at 1:55 PM