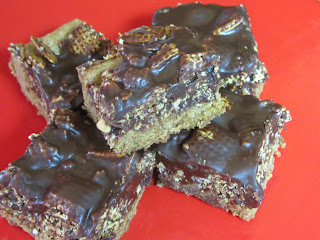 Wow, what an eventful past week it's been. I certainly did not plan on spending it in the hospital but my body had other plans I guess. What I thought had been my heartburn acting up again turned into gallstones. It sort of all started the Wednesday before and progressively got worse until it hit me last Sunday evening before supper time. I was in so much pain throughout the night that I literally did not sleep at all, just walked around the house trying to ease the pain in any way possible. I attempted to go through my day like normal on Monday and just rested as much as I could while trying to care for 3 little ones. After my little daycare boy went home for the day I made a trip out to convenient care to get checked out, thinking I would be able to get some sort of medicine and go home. Boy was I ever wrong!

After doing some blood work they determined that something was not right and I needed to have further testing done and would be admitted for the night. My triglycerides were at 3000 and normal is under 200, so that was a little scary. My white blood cell count was also very high. After having an ultrasound of my gallbladder and pancreas they determined that I did in fact have gallstones and would need my gallbladder removed but more importantly I also had developed pancreatitis and we need the inflammation to go down quite a bit before we could even think about surgery. My levels went down quite a bit on Tues but not near enough to even think about surgery yet. At that point we were thinking Friday would be the earliest and I was getting frustrated with the thought of possibly spending my whole weekend in the hospital and not with my family. By Wednesday morning my triglycerides were down to 175 and I was in the clear for surgery.

I have to admit, I was scared to death at the thought of surgery. Other than child birth (and I had all natural/no pain meds deliveries) I had never been in the hospital. After it was all done with I felt pretty silly for getting so worked up because it wasn't so bad and I don't remember much at all. In fact the last thing I remember is the nurses asking me for my business information so they can order cupcakes from me haha! I ended up coming home Thursday afternoon and have been resting and taking it easy ever since. Today is the first day my husband has gone back to work, so the little ones and I will be taking it slow and easing back into our normal routines.

So that's sort of how my eventful week went, I was really bummed that it had to happen last week of all weeks. I had a lot going on that I had to cancel and I had some really cute Easter ideas I wanted to share with you.....but that's just how life goes sometimes. You have to just roll with the punches. For the past few years I've hosted Easter at our house so that had to be postponed as well, but that's okay, it was a nice relaxing day with just our kids. My parents even ended up bringing dinner over so we could have a nice ham meal, it was the perfect ending to a good day! 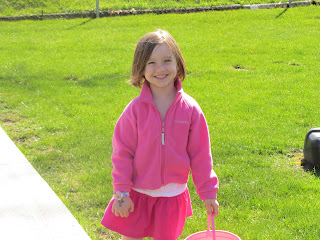 The kids even enjoyed a small egg hunt in our backyard
I made these bars last weekend before I got really sick, I was in the mood to bake something and thought of these. 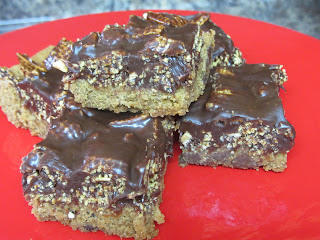 They are quite one of the easiest bars ever and absolutely delicious! I love the chocolate chip cookie bottom and the crunchiness from the chex cereal and chopped peanuts. Oh and that gooey chocolate caramel on top.....yum! You'll be satisfied with just a small piece, but I won't judge if you eat more.

Meanwhile, in a saucepan, cook 1 cup of milk chocolate chips and 1 cup of the caramel dip over medium heat. Stir constantly until melted and smooth. Remove from heat and stir in cereal and chopped peanuts. Spread the mixture over the cooled cookie crust. In another saucepan heat the remaining chocolate chips and caramel until melted and smooth. Spread over the cereal mixture. Let set until the chocolate mixture is cool, you can refrigerate for about 30 minutes to speed up the process. Cut into bars and enjoy!